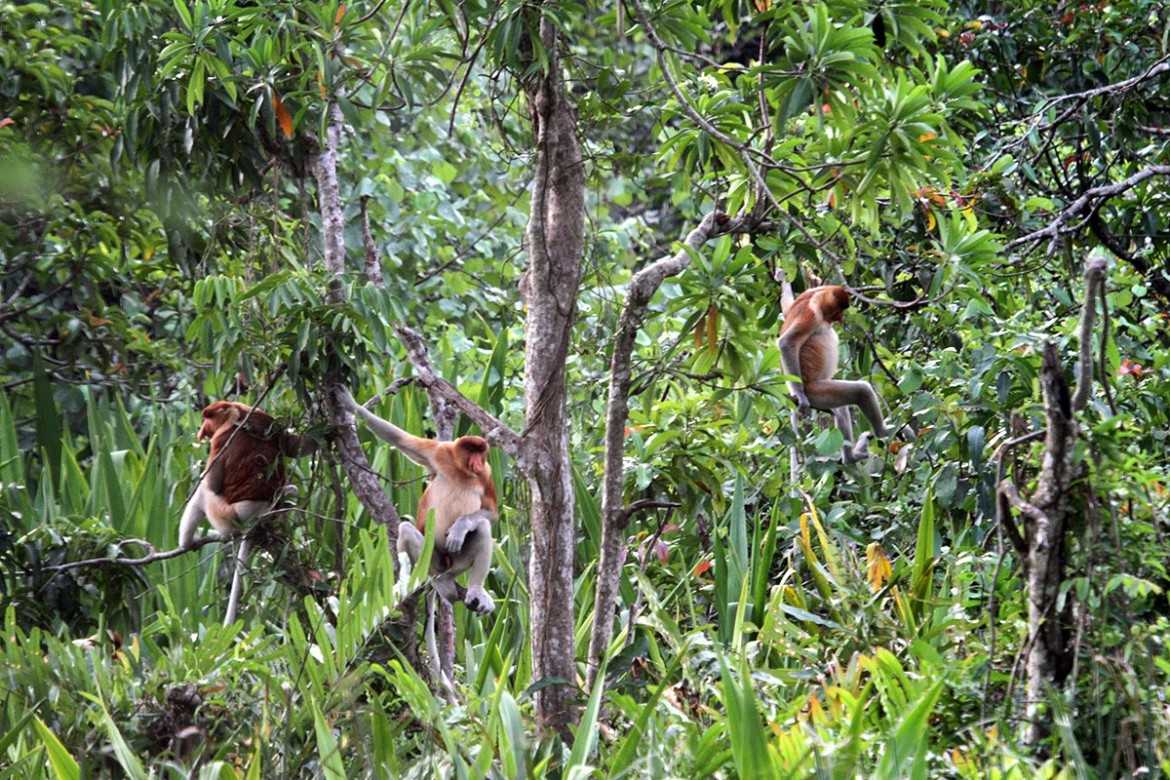 In the episode called “Flight 714” of the classic comic series Adventure of Tintin (released in 1968), there is a hilarious scene where a character named Allan looked at a peculiarly unique long-nosed monkey and imagined it to be his boss Rastapopoulos. That peculiarly looking primate is in fact a Proboscis Monkey, the unique mascot of South Kalimantan. These indigenous dwellers of the Borneo Forest find their home at Pulau Kaget Nature Reserve.

Situated near the estuary of the Barito River, which flows through the city of Banjarmasin, Pulau Kaget (Kaget Island) is a delta-island formed by the sediment of mud which grew from the river bed. Administratively, the island is located within Tabunganen sub-district, in the Barito Kuala Regency, South Kalimantan Province. The fertile soil of the island provides much needed minerals to the various vegetation that grows on it, thus creating a dense forest which became the habitat of various wildlife.

Pulau Kaget itself translated literally means “Startling Island”. Although there is no official account as to the origin of the name, it is believed that it may have derived from the startling sensation one gets when entering the island and one is greeted by the boisterous sounds of hundreds of monkeys amidst the dense trees. The 85 hectares island was established as a nature reserve in 1976 following the affirmation from the Ministry of Forestry.

The unique Proboscis Monkey is obviously the star of this reserve. With the Latin name Nasalis larvatus, the monkey is locally known as Bekantan or the Dutch Ape due to its big and long red nose and large belly. The shy creature is an endemic species which can only be found in Borneo and is known as one of the largest monkey species native to Asia. The proboscis monkey is assessed as Endangered in the IUCN Red List of Threatened Species and listed in Appendix I of CITES. Its total population has decreased by more than 50 percent in the 36–40 years to 2008 due to ongoing habitat loss and hunting in some areas. Since 1990, the Proboscis Monkey has been “appointed” as the mascot of South Kalimantan Province.

Aside from Proboscis Monkeys, the nature reserve is also home to the long tailed macaque (Macaca fascicularis), lutung apes (Presbitis cristata) and various species of birds including: the Parakeet (Psittacula alexandri), the Brahminy Kite (Haliadus indus), the Kingfisher (Halcyon choris), the Sea Eagle (Inchthyophaga inchtyootus), and many others. Among the many vegetation found in this reserve are: Mangrove, Rambai, Nipah, Bakung, Api-api, Pandan, and Jeruju.

Located not too far from Banjarmasin, capital of South Kalimantan, Pulau Kaget can be reached in 15 minutes by speed boat. If you wish to try Kalimantan’s traditional river boats called ”klotok”, the trip will take approximately one and a half hour.