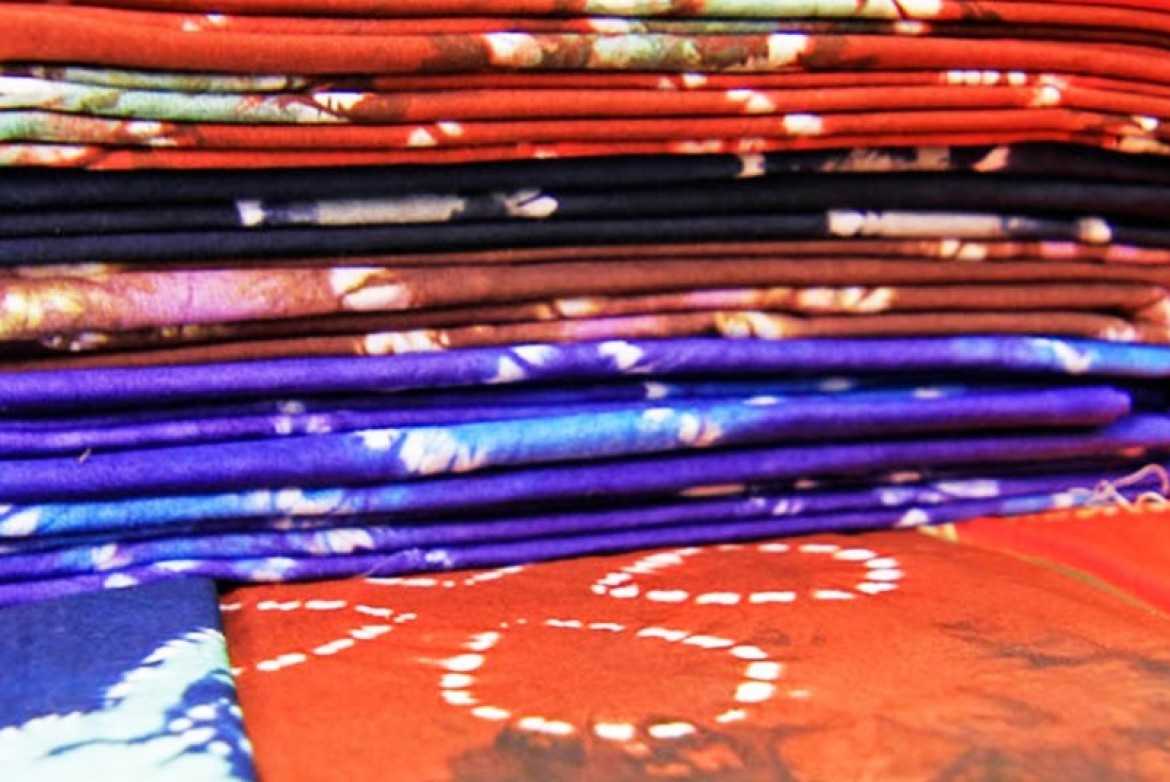 Aside from the glittering gemstones that can be found in the towns of Cempaka and Martapura, the province of South Kalimantan has its treasure within the culture of its indigenous Banjar ethnic group itself. Passed down the generations and crafted by the finest hands of the Banjarese, the art of Sasirangan is manifestation of Banjar’s ethnic sense of art on sheets of fabric.

Sasirangan itself is derived from the Banjar word sirang or menyirang meaning “to stitch together” which illustrates the delicate process of hand stitching and weaving of the traditional fabric. The method in making Sasirangan is similar to that in Javanese Batik, which applies the barrier coloring process. The difference is that Sasirangan uses barrier cloth such as string or yarn instead of wax and ‘canting’. The artist stitches the pre-made patterns on cloths, then bind the required patterns with string to avoid contamination with other colors, the fabric then dipped in dyes.

Traditionally, natural dyes were used for colors; turmeric roots were used to create yellow, karabintang fruit and areca nut to make red and brown colors, etc. Today chemical dye is more commonly used. This coloring process is called Pewarnaan Rintang, or color blockage. The last step is removing the stitches when the pattern designs would appear clearly. One cannot create an exact pattern because of the manual process. Unlike in contemporary Javanese batik printing, mass production of Sasirangan is not possible either. Productios of a simple piece of Sasirangan can take about 4 days, while the complex pieces require a few months to finish.

Many people suggest that the production of Sasirangan was started around the 12th to 14th Century, during the period when King Lambung Mangkurat ruled over the Kingdom of Dipa in South Kalimantan. In the beginning, the particular type of fabric was recognized as Kain Pamintan or “Tailored Fabric” since each fabric was designed and made to specific requests. The particular motif and type of clothing were designed with the guide of a traditional healer or spiritual elder for purposes of spiritual ceremonies. During that time, only Shamans, or those who have the ability to cast out evil spirits, were allowed to make Kain Pamintan.

Nowadays, although it may have lost some of its spiritual aspects, Sasirangan has transcended its traditional form and has made its way to modern fashion. Since the 1980’s many sasirangan shirts and blouses were produced for daily and formal wear. This revival resulted in the birth of hundreds of small home industries since no special or heavy equipment is required. In Banjarmasin, capital of South Kalimantan, a center for Sasirangan production can be found at Sasirangan situated at the Kampung Melayu area. Since 2010 Sasirangan village has been appointed by the Tourism Office of Banjarmasin City government as one of the city’s top tourist destinations.